Musical selections by the Bob Cunningham Trio - 10:00 AM

Central Brooklyn Jazz Consortium/CBJC will hold its 8th Annual CBJC Jazz Festival from April 4th to April 29th 2007. The theme for this year's festival is "Jazz and Rhythm-Voice of the People," which speaks to the tempo of jazz music as it finds its sound in the contemporary voice of the people.

“Jazz musicians have always lived in Brooklyn , composed their music here, and performed for our residents, like ‘ Charlie Parker Place ’ in Bedford-Stuyvesant, which once boasted more than 20 jazz venues,” said Borough President Markowitz. “The Central Brooklyn Jazz Consortium’s eighth annual jazz festival confirms that Brooklyn will remain a jazz capital in the days ahead — from legends like Randy Weston performing at the Brooklyn Historical Society to a peek at the young lions at the Youth Jamboree, Brooklyn will be boppin’!”

The Central Brooklyn Jazz Consortium, born in 1999, is an amalgam of jazz musicians, venue owners, churches, community based organizations, and patrons of the music. Over the past 7 years, they have presented an annual spring festival, established a Brooklyn Jazz Hall of Fame, and produced yearly programs of events and activities that feature local jazz musical talents.
Posted by Unknown at 12:50 PM No comments: 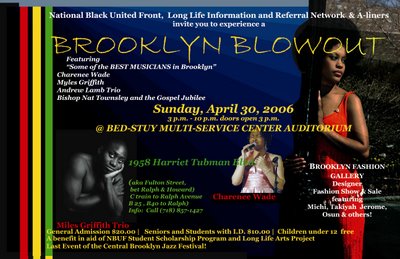 Brooklyn Blowout Event to mark close of the 7th Annual Central Brooklyn Jazz Festival. Featuring Some of the Best Musicians in Brooklyn.

- Bishop Nat Townsley and The Gospel Jubilee â€“ sensational gospel group with his younger daughter Bonita and many more. Playing selections from their new CD Follow The Star.
- Charenee Wade â€“ Brooklyn bred talented young singer. She has recently appeared at Tonic Nightclub on the lower east side of Manhattan, a former student of NSP Youth, Inc.
- Miles Griffith - a singer who is in the spirit of the late Leon Thomas. Performing in Brooklyn before a groundbreaking tour of German jazz clubs.
- Andrew Lamb Trio - will be playing music from their recently released CB New Orleans Suite.
- Brooklyn Fashion Show & Sale - Models from Fashion Flyte will exhibit fashions by Brooklyn's designers. Designer Michi, Osun, Takiyah Jerome as well as other vendors will havethe creative artwork for sale.

Invited to welcome the participants of this event is the newly elected New York City Council Member, the Honorable Darlene Meadly

Enter your Email to have updates delivered directly to you


Powered by FeedBlitz
Posted by Unknown at 9:20 AM No comments:

CBJC FESTIVAL DRAWS TO A CLOSE 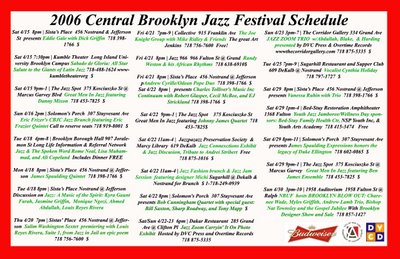 Click on photo to View larger flyer!
Posted by Unknown at 6:15 PM No comments:

Jazz Festival up dates can be seen at, www.centralbrooklynjazz.org

Posted by Unknown at 9:27 AM No comments:

Central Brooklyn Jazz Festival up dates can be seen at, www.centralbrooklynjazz.org
Posted by Unknown at 12:58 PM No comments:

JAZZ: A MUSIC OF THE SPIRIT

MAKE IT A MICHELOB NIGHT

A NIGHT of MICHELOB JAZZ!

SPONSORS: The 7th Annual Central Brooklyn Jazz Festival 2006 and CBJC activities are made possible by,

Delegation to the New York City Council and CBJC member organizations. This CBJC program is supported,

in part, by public funds from the Department of Cultural Affairs and the State of 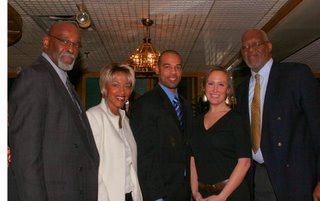 under the direction of Ervin Simpson, featuring the vocal stylings of

appearing at Jazz 966 on

On this occasion, the band appears in a program entitled:

This event is part of

Jazz: A Music Of The Spirit

"With toes tapping and fingers snapping, residents filled the park and swayed the night away."... Lynbrook/East Rockaway Herald

"The solos were deft and complex, veering off the melody into zones of time, space and sound."...24/7

This highly professional swing band, which actually started in the 50â€™s under the vision of Hank Dougherty, was acquired by â€™s famous jazz saxophonist and prolific arranger, Ray Abrams. Ray passed on in 1997, but the band continues to entertain lovers of swing and classic-jazz. The 18 members of the band consistently recreate the unforgettable love ballads-- that Donna sings wonderfully-- and the hard swinging, finger-snapping, toe-tapping instrumental tunes of the greatest swing-bands of the 40â€™s and 50â€™s, many of which feature the bandâ€™s soloist and Donnaâ€™s swinging vocal stylings.

The bandâ€™s library of musical arrangements is lengthy and well rounded, ranging from the still modern sounding charts created by Ray Abrams, to the swinging big-band charts from the minds of arrangers like Sam Nistico, Jones, Sy Oliver, Neal Hefti and so many others. This valued musical library supports the bands ability to create a well-rounded program of classic-jazz as played by the bands of Basie, Ellington, Herman, Hawkins, Eckstine and Hampton, etc.

The band's unique ability to perform to the spirit of the music and to swing at the drop of a hat is consistently nourished by the very dedicated skills of the bandâ€™s leader, Ervin Simpson, who has led the band since 1998. No doubt, this ability to swing the most beloved songs from The Classic American Jazz Songbook, explains why the band continues to maintain a growing presence in the tri-state area.

Of late, the Band has appeared at an increasing number of venues in the five boroughs and on . 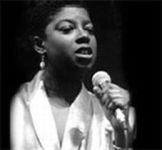 Jazz! The Women's Viewpoint is an annual forum conceived seven years ago by the late Rosalind Blair, who was a member of the pioneering group Club Jest Us; a group of women promoters who were responsible for the vanguard recording at Night of the Cookers. Her desire was to set a safe place where women can share their views on the topic of Jazz, and their involvement on both artistic and personal levels. If Jazz is a cultural lifeline and culture expresses the civility of a people, women in the Jazz environment are the ones who can bring forth the truth. Therefore the position women must take is to speak on the facts that relate to them in this rich cultural expression! 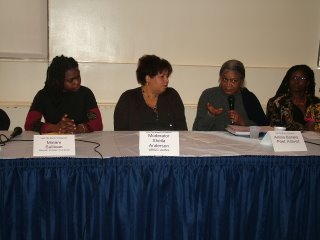 Initially, the forum included a panel of 6 including musicians and wives of musicians concluding with a musical presentation. An honorarium was paid to all participants. Ms Blair funded the entire program herself. The presentation has evolved to be Intergen-
erational and the addition of more music. We ask that each panelist in addition to the discussion, present a small selection of her art.

Jazz! The Womenâ€™s View Point has had stellar roster of talented musicians and equally talented wives of musicians lend support to this forum over the years. They include Amina Baraka, Dena Vireo, Miriam Sullivan, Charande Wade, Bertha Hope Melba Joyc 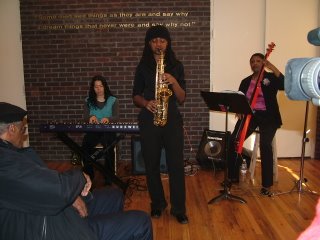